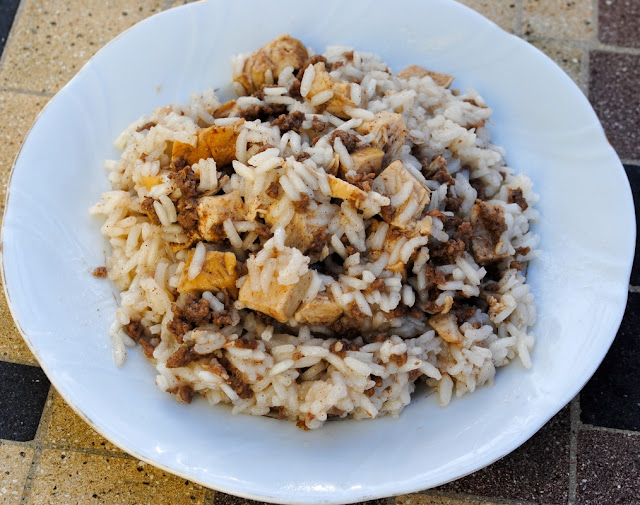 Riz ala’ dajaj (pronounced da-jej) is a delicious Lebanese rice dish traditionally cooked for special occasions. It is typically served as a side dish but can definitely be eaten as a main dish (it has chicken and beef in it!).

1. In a pot add chicken, a cinnamon stick, a peeled onion and cover with water. Cover pot and bring to a boil

2. Uncover pot and let simmer for 30 to 40 minutes to allow the chicken to cook

3. Move the chicken to a plate. Remove the cinnamon stick and onion. Save broth and put it aside.

4. Cut up chicken in small cubes

5. In a separate pot, add olive oil and butter. Once the butter is melted, add beef, a teaspoon of salt, a dash of pepper, a teaspoon of allspice, and a dash of cinnamon. Sauté until the meat is no longer red (keep the mixture juicy)

7. Add your broth from earlier and cover the rice a half of an inch over. If there is not enough broth, add water. Bring it to a boil

8. Simmer and cover for 30-45 minutes or until the water is gone (taste the juice while cooking to see if more spices are needed)

*Optional* Toast some nuts of your choice and put on top of your cooked rice (shaved almonds, walnuts, pine nuts, etc.)