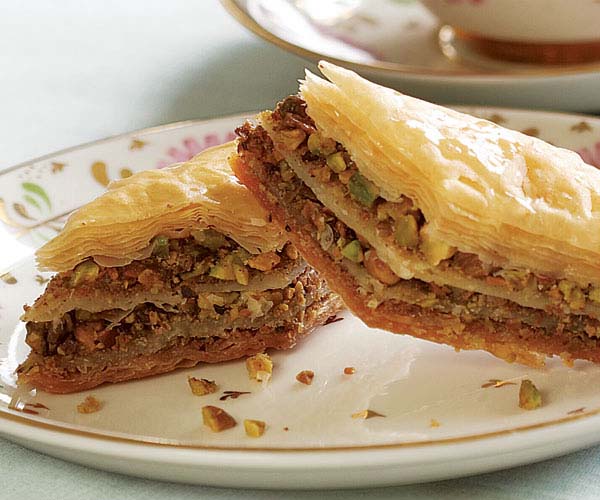 Thaw the phyllo overnight in the refrigerator. Then put the phyllo box on the counter to come to room temperature, 1-1/2 to 2 hours.

Make the filling:
Put the pistachios, sugar, cinnamon, and cardamom in a food processor. Process until the nuts are finely chopped (the largest should be the size of small dried lentils), 15 to 20 seconds. Set aside.

Assemble the baklava:
Unfold one pack of the phyllo sheets and stack them so that they lie flat on your work surface. Cover the top with plastic wrap, letting some excess plastic fall over all four edges. Dampen and wring out a kitchen towel and drape it on top of the plastic wrap; this will hold the plastic in place and prevent the phyllo from drying out.

Melt the butter in a small saucepan. Brush the bottom of a 9×13-inch metal pan (preferably with straight sides and a light-color interior to prevent overbrowning on the edges) with some of the butter. Remove a sheet of phyllo from the stack, re-cover the rest (be sure to cover the remaining sheets each time you remove a new one), and put the sheet in the bottom of the pan.

Brush the sheet with some of the melted butter but don’t soak the phyllo (remember, you’ll have about 40 layers of buttered phyllo by the time you’re done). Repeat until you have layered and buttered about half the sheets from the first pack—about 10 sheets in all. If your pan has slightly angled sides, arrange the sheets so the excess falls on the same side of the pan and cut the extra off every few layers with a paring knife.

Sprinkle about one-third of the filling evenly over the phyllo.

Repeat layering and buttering the remaining sheets from the first pack and sprinkle on another third of the filling. Open, unfold, and cover the second pack of phyllo. Layer and butter it as described above, sprinkling the remaining filling after layering about half the phyllo, and ending with a final layer of phyllo (you may not need all of the butter). Cover loosely and put the pan of baklava in the freezer for 30 minutes (this makes it much easier to cut the pastry).

Bake the baklava:
Position an oven rack in the center of the oven and heat the oven to 350°F.

Before baking, use a thin, sharp knife (I prefer serrated) and a gentle sawing motion to cut the baklava on the diagonal at 11/2-inch intervals in a diamond pattern. Try not to compress the pastry by pressing down on it with one hand while cutting with the other. Not only are you cutting serving portions, you are also cutting pathways for the flavored syrup to permeate the pastry, so be sure to cut the pastry all the way to the bottom of the pan. If you have an electric carving knife, this is the perfect time to use it.

Bake the baklava until golden, 40 to 45 minutes. Transfer to a rack and let cool completely. If making one of the variations below, run a knife along the cut lines. (Both variations contain sticky ingredients that can seal the cuts shut during baking, making it difficult for the syrup to be absorbed evenly.)

Make the syrup:
Put the sugar and 2/3 cup water in a small saucepan and bring to a simmer over medium heat, stirring occasionally, until the sugar is dissolved and the liquid is clear, about 5 minutes. Remove the pan from the heat and stir in the orange flower water (if using).

Pour the syrup evenly over the entire surface of the baklava, allowing it to run down into the cut marks and along the sides of the pan. Allow the baklava to cool to room temperature before serving.

The baklava is at its best about 24 hours after the syrup is added. It will keep at room temperature for up to 5 days, though the texture changes from flaky and crisp to more solid and crystallized as time goes by. Both textures are delicious and have their fans.